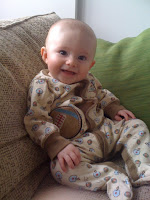 In order to appease you all for my absence last month (just one post in February! Where on earth was I?), I'm posting a photo of our son who is quickly becoming quite the little man. He's cute, he's happy, and he's a hell of a lot of work. But life is good in the FFLibrarian household and we've got big news churning over here. As many of you know, my husband and I moved to Brooklyn 1.5 years ago after spending seven years in Boulder, Colorado...and now we're moving yet again. My husband is an academic, hence our mildly nomadic life, though I'm thinking this next move might stick for awhile. We won't know where we're going for another 24 hours or so until all job offers have been made and weighed and reweighed, but I can safely say that we will soon be living in the south. Quite the whirlwind to go from the mountain west to NYC to southern living. Glad you all have been along for the ride and it should once again keep my summer a bit nutty as I balance el bebe, moving, and fantasy football. If I thought moving across the country with two cats was a challenge, can't wait to see what it's like with a 10 month old in the mix.

So let's get to today's linkage:

BlogFront.org is committed to uphold the quality standards of blogging. We strive to maintain and promote only the most credible blogs in their respective fields.

Spam blogs or "splogs" has been a problem for some time now and people are getting confused about which blog to trust.

We would like to thank you for maintaining such a reputable blog. We know that it takes time, effort and commitment to keep such a blog and as such, we have added your blog as one of the top Fantasy Football Blogs.

You can see your blog listed here: http://blogfront.org/fantasy-football

You can also claim your BlogFront Top Blogs badge at http://blogfront.org/badges/fantasy-football

Thank you for keeping your blog credible. Let's keep the blog revolution alive!