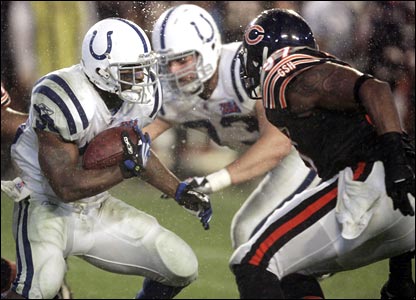 Are you sitting around, staring at the work e-mails piling up and yet you can't stop yourself from staring into space and pondering the burning questions of the 2007 football season? Will Peyton return to Super Bowl greatness this year? Is there life without Tiki? What will happen to Pep...or for that matter, Vick, Rex, Romo, Randy Moss, and a slew of others? If so, you're in the right place. Not only do I lack judgment against those who can't focus on work when FOOTBALL is coming, but I have the answers to your top 15 NFL questions - as deemed by CBS Sportsline.

Next...the kicker. You are required to draft a kicker whether you like it or not. And who knows, perhaps you'll be jumping around singing the praises of the gold-footed Jason Elam because he's awesome, yes, but also because he helped you eke out a win over your fantasy nemesis. I've been there and I love Elam for it. So to help with the drafting of a kicker, see SportingNews.com's Kickers: Yes, you have to draft one.

Finally, another excellent Wednesday's Top Ten from The Hazean yesterday - this time they've pulled together a randomly-ordered Top Ten Sleepers for the 2007 season including such players as Jamal Lewis, DeDe Dorsey [photo: BBCSport], and Jerious Norwood.