July 09, 2007
Sorry, this post has no redeeming fantasy football value - just a quick note to say I think I almost flew on the same flight as Ben Roethlisberger this afternoon. My husband and I were on vacation visiting family for the long weekend and flew from Pittsburgh to Denver today; we arrived at the airport really early to accomodate another family member's flight time and tried to get on an earlier flight to Denver on stand-by. That earlier flight ended up being sold out so we didn't get on, but as we were sitting at the gate, first class boarded...and there was Big Ben. Or else a dead ringer for him. Not to sound like a star-struck teenager but it was pretty awesome. It would've been such a fine addition to the three hour flight to be able to muster up the gumption to meet the guy, too.

Our weekend also included a trip to the Pro Football Hall of Fame in Canton, Ohio - a surprisingly crowded and entertaining place, to be honest. A few photos of interest for you include Larry Johnson's shoes when he set the record for rushing attempts in a season and Jason Elam's shoes when he kicked the 63-yarder record FG for the Broncos...geez, those are both shoe photos. Promise there are cooler items than just shoes there but apparently these are some of the only things I caught on film. More on fantasy football soon. 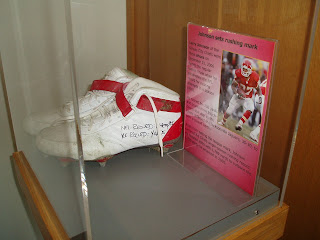 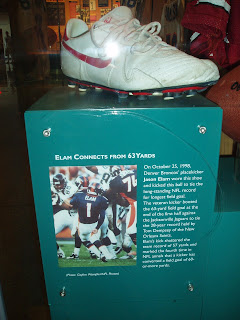