Fantasy Fuel for a Monday 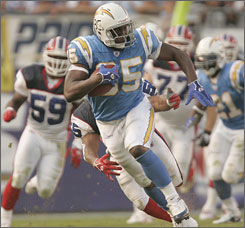 So last week I complained about the lack of TE rankings/postings out there and what do I immediately find? Another TE article, this time from FFToday.com - as part of their Building a Dynasty series they include both the long term and short term value as well as job security for each of their top 10 TEs [Antonio Gates photo: Robert Hanashiro, USA Today].

With the football season creeping closer every day, many drafters are putting the polish on their own personalized rankings...and others are just thinking about the draft for the first time this year. No problem - either way, check out FantasySharks.com's More Bang For Your Buck. They've looked at players who can be taken a little later in the draft and still produce the fantasy numbers you need - who wouldn't want advice like this? Exactly. So we've got more - ProFantasySports.com's Undervalued Players to Draft also takes you through a list of middle or late round draft picks that just might put up some big numbers.

Finally - another Offensive Line Ranking. These are not easy to find, my football fiends. In an earlier posting, I linked to Rotoworld's Going on the Offensive and was left wanting more o-line rankings. It merely whetted the o-line appetite. Fortunately, FootballDocs stepped up to the plate and created 2007's projected offensive line rankings; unfortunately, they are not all available for free. You can see the first three teams but then are requested to pay for the rest. I just don't roll that way. But for those that do, there appear to be separate pass blocking rankings, run blocking rankings, and then an in-depth ranking.

And because I'd rather close on a here's-free-fantasy-information note, click here for some helpful bye week suggestions from CBS Sportsline for your QB and RB fillers when your "stud workhorses" are on bye.

LJ said…
TE's don't get enough respect in Fantasy circles. I make sure I get a top guy because it puts you at an instant matchup advantage over the guy who waited and was stuck with Leonard Pope.