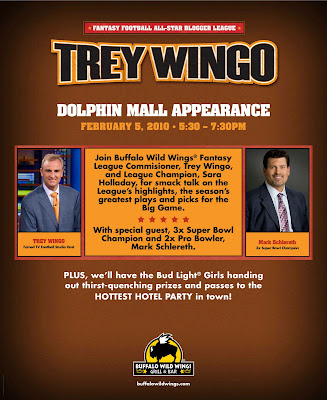 My mom just bought a new TV for the Super Bowl, primarily because she's under the impression that she's somehow going to see me during the game. I really appreciate her enthusiasm but am trying to convince her that it's unlikely that the cameras will find me among all the many thousands of other attendees. Instead maybe I can get her in on my twitter bandwagon...but hey, you've gotta love moms.

Speaking of the Super Bowl, scope out the poster for my BWW appearance on Friday with Trey Wingo and now Mark Schlereth, too. Must say I would've liked to see my face on that poster, too, but I'll take my name! If you're in the area and can come by Buffalo Wild Wings in Miami, please do! We'll be giving away prizes and passes to events over the weekend.

And just a reminder that I'll be tweeting and then also blogging on the BWW All-Star Blogger website during the Super Bowl weekend and the game itself. Swing by to follow along with my crazy escapades! Meanwhile if you're wondering what's going on at the SB right here and now, well it's Media Day.

I could probably talk about the Super Bowl for quite some time but I'l stop myself and move on to today's links instead:

Anonymous said…
Going to the SB, and now you get Schlereth too, how sweet is that for a Bronco fan.

Chris said…
And my Detroit Tigers just traded for his son to add some heat to their bullpen. After watching the "Changing of the hats" You Tube video with Schlereth you have to love the guy. He is funny as hell and obviously a great father!