Guest post: A look at Fantasy Points Against for QBs

July 11, 2010
Happy World Cup Day! To cap off a day full of soccer fun, let's get to this week's guest post from Cris at fantasyomatic.com - this time he looks at fantasy points against/strength of schedule for quarterbacks. Once again I'll post players/teams 1-3 and you can read the rest on fantasyomatic.com.

Welcome to part two in a series of draft prep articles leading up to training camp. This week the focus is on fantasy QBs. We ranked all 32 teams based on their Fantasy Points Against Strength. In this article, we will break down each team and profile every QB candidate. You will also find helpful information on 2009 Yards Per Attempt, 2010 Strength of Schedule and 2010 Fantasy Playoff schedules. Don't worry about Fantasy Points Against data here being grabbed just from 2009. The algorithm used at fantasyomatic.com has been hard at work cranking out "defensive ranking against fantasy position" projections all spring. The "FPA" values you see here include 2010 adjustments for the draft additions, free agency additions, coaching changes in the offseason, defensive scheme updates, daily fantasy news updates and up-to-the-day depth charts. In addition, the FPA values are also weighted against their strength of opponents in 2009 and then again against their strength of opponents in 2010.

What to Look for: Players with high YPA and trends of low FPA ranks against especially during weeks 14-16 (fantasy playoffs). A good combination of low ADP and a high rank in FPA with a lot of involvement in the offense = value. Also watch for mentions of a high red zone score percentage (RZS%), which denotes a QB that's involved in a lot of red zone scoring.

For the rest of the rankings, take a look at the full article here on fantasyomatic.com. 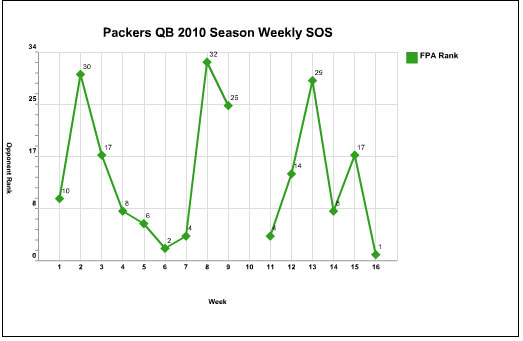 Outlook:
In 2010, Aaron Rodgers faces 8 of the top 10 ranked teams that are ranked for giving up the most fantasy points to QBs (adjusted for 2010). He also finished as the #1 fantasy scorer in the league in 2009 (#2 in 2008). What have you got to be afraid of? Astute NFL watchers will be concerned about the amount of times he was sacked in 2009, thus not allowing him to get down field. But look at this stat: Rodgers was sacked a league-leading 50 times in 2009, but 25 of those sacks came in the first 6 games. Then the team "called him out" for holding onto the the ball for too long and he corrected. Finishing with just 8 sacks in the last 6 games.

So why is Rodgers the #1 overall QB in 2010? He had 5 TDs (1st)  and 304 yards rushing in 2009 (2nd of all NFL QBs). That's 270 yards and 3 TDs more than Brees. GB was 5th in red zone scoring in 2009 with a strong 56% RZS%. 5 of those red zone TDs were Rodgers' rushing TDs and 8 of them were TE TDs. Rodgers has the 4th easiest QB SOS (strength of schedule) season and 3rd easiest QB schedule in weeks 14-16. There is a strong case to make for taking him in the top 10 of your fantasy draft if your league awards 6 points per passing TD. Coach Mike McCarthy praised Aaron Rodgers for his "commitment to the offseason program" and says the Packers will "challenge (Rodgers) with more things at the line" this season. Our position is that Rodgers is a clear cut #1 QB above Brees and Manning, due to Rodgers' great schedule and his fantasy playoff matchups. 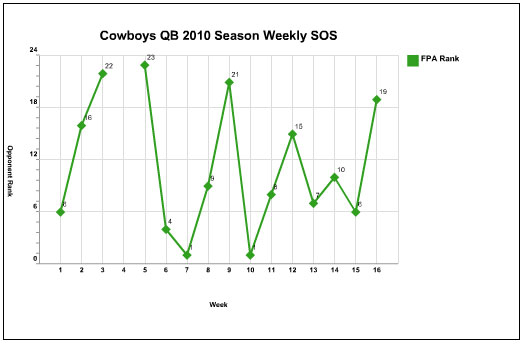 Outlook:
Jerry Jones wants a Super Bowl at home and he just might get it. Collectively Dallas has the one of the easiest schedules in the league and at nearly every skill position. Tony Romo passed for a career best 4,483 yards in 2009 while everyone undervalued him because of the Terrell Owens departure. However, he developed a rapport with Miles Austin and has even more depth this year with the addition of Dez Bryant. He also had a career low in interceptions in 2009. If you choose to pass on the big three QBs in round one or even top of round two, then Romo is your guy. He affords you the opportunity to grab a top-notch RB and WR in the first two rounds and get Romo in the 3rd. And you still won't be too far behind the top QBs. DAL also ranked in the top 10 for QB RZS% with 62% and Romo even had 1 rushing TD in the red zone himself. He will assuredly give you 2nd round value and could possibly be the top QB in fantasy during the playoffs. Look twice at this chart as his worst rank against is 24 with a #1 rated SOS for QBs and a top 10 fantasy playoff rank. Grab Miles Austin, Jason Witten or any of the WRs. Each has their own value at different points.The passing game might start slow, but will dominate in the late season. 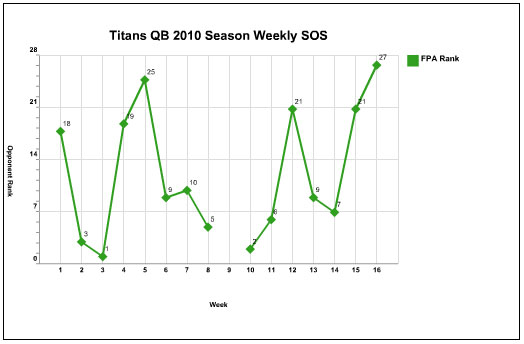 Outlook:
Can Vince Young learn to throw the ball for more than 180 yards/game? Or will you be praying for 45 yard runs to even out your fantasy week? He has his flaws, such as his 58.4% completion rate and only exceeding 17 completions twice in his 10 starts. We are talking a QB2 at best and he could end up being a really cheap 12th rounder with spot-start potential. You can't argue about his price so the risk is very minimal. Keep in mind that in 2009 he finished the season with these totals for fantasy points: 15, 21, 20, 15, 27 and 7. During his 10 starts in 2009, he averaged over 16 fantasy points/game and ranked among the top 10 QBs during that span. Even though VY didn't play an entire season, Tennessee enjoyed a 4th overall QB RZS% (63%) for all teams with over 20 red zone scores.

Anonymous said…
Or you could just flip a coin