Why the Broncos' Offense is Better than the Saints' Offense 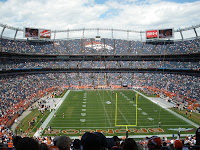 This guest post comes courtesy of The Hazean - we made a bet that the losing blogger of the Broncos v. Saints game would have to post on the other blogger's site about the awesomeness of the winning team's offense. And Michael from The Hazean very appropriately talked both offense and defense....read on and enjoy the photos I took at the game (I tried to get catch Bush, The Hazean's favorite player, as well as Scheffler, my favorite player).

I know I said I would write about why Denver's offense is better than New Orleans' offense if I lost the bet with the Librarian, which I did. And I promise to deliver on that point.

But maybe this game was not so much about which offense was better, but rather which defense was less worse. It seemed to me that both teams were able to move the ball effectively up-and-down the field on Sunday en route to Denver's 34 - 32 victory.

Jay Cutler and Drew Brees lit up the skies with an impressive aerial attack, combining for 685 passing yards and three touchdowns. 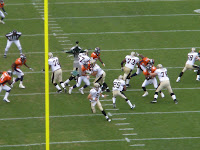 Reggie Bush led the way for the Saints, totaling a very balanced 148 yards from scrimmage (73 on the ground and 75 in the air). Brees, who accounted for 421 of those passing yards, made it look easy from time-to-time, completing passes at will to nine different receivers. Cutler, not to be outdone by Brees, completed passes to eight different receivers and finished with 264 yards and two scores. Brandon Marshall caught six of Cutler's passes for 155 yards and a touchdown, making it look easy once again. He nearly had a second long touchdown had he not stepped out of bounds after the catch. And his first touchdown was a thing of beauty, as he tapped down the second foot just in front of the back of the endzone on a play which needed replay review for confirmation.

But Denver's defense, less worse than the Saints' D on this day, made several key plays that altered the landscape of this game.

For one, returning Reggie Bush's fumble in the second quarter for a touchdown was huge. The Saints had several opportunities to tackle Nate Webster but could not do so. It put New Orlean 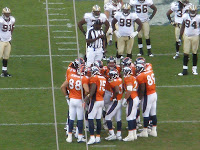 s in a 21 - 3 hole early, which proved to be too much for the Black & Gold to overcome. Secondly, the Broncos stuffed the Saints' on two crucial short-yardage situations. At the end of the first half, the Saints were able to drive down to Denver's one-yard line, only to watch Pierre Thomas get stuffed on fourth-and-goal. Luckily, the Saints were able to get a safety on the very next play, but a touchdown would have tied the game at 24 heading into halftime. And late in the fourth quarter in Denver territory, the Saints again faced a short yardage situation. Again, on third-and-one this time, Thomas got stuffed by the Broncos' defensive front. Instead, the Saints settled for a Martin Gramatica 43-yard field goal and, well, you know the rest.

So on a day when both offenses shined, it was Denver's less-worse defense that made the difference in the outcome.

Congrats to the Broncos and their fans on another impressive win!

Anonymous said…
Haha. Nice post from The Hazean although I imagine him writing it all with a bitter taste in his mouth.

I do like me some Broncos this year. Scheffler and Jay Cutler are my favorites at their position this year.
2:42 AM

Anonymous said…
Alright, I figure I can ask a Denver fan:

My defense is on a bye next week (Giants) and all of the good defenses have already been picked up. However, I noticed that Denver plays Kansas City next week.

Kansas has a bad offense, Denver doesn't have a stellar defense. Do you think I should start the Denver D?
8:36 AM

Unknown said…
well Hazean since the librarian has been respectful in her win of the bet, i'll do some dissing on my own in her honor... the Saints offense couldn't pull it off and it's all because reggie bush isn't really a RB! he's a fake RB that can't get it done when it really matters! (yes i'm bringing retroactive hate to reggie as i am an OSU fan :::hangs head in shame:::)
9:02 AM

Fantasy Football Librarian said…
Glad to hear you enjoyed the post, Jacob. But I'm even more glad to hear you're digging the Broncos this year.

Rushi, this is a very hard one for me. Clearly I love my Broncos and at times they do indeed have flashes of defensive brilliance. KC has been held to 14 or fewer points so far this season so I'd say if there really aren't any better options out there, then go with Denver.

Thanks for the diss in my honor, potlicker. Just last night I was telling my husband how much I wished I could plug Bush in as a WR instead of an RB. He was EVERYWHERE during the game on Sunday. Without Bush the NO offense would be in serious trouble if you ask me...though I do totally appreciate and perhaps even encourage retroactive hate from college football.
10:41 AM